“That shit is the mad notes. Written by God Herself and handed down to the greatest band in the world… the motherfuckin’ Time!” – Jay and Silent Bob Strike Back 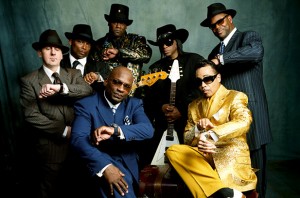 That’s right retro party people, the Time is back, except due to some longstanding legal what-have-you’s they are now The Original 7ven, or ‘the band formerly known as the Time’ as they slyly call themselves in reference to the man that still owns the rights to the original name. Apparently, other than that small detail, they are still on good terms with the Purple One.

Condensate, their first album of new material in 21 years, drops today and features all seven original members of the Time – Morris Day, Jimmy Jam, Terry Lewis, Jesse Johnson, Jerome Benton, Jellybean Johnson and Monte Moir. Judging from the sound of the first single, #Trendin, the dance-funk grooves that helped put the 80’s Minneapolis R&B music scene (great article on early Prince and the fellas) on the map are alive and well, updated with lyrics pertinent to the signs o’ the times. Some material dates back to the 90s, according to Lewis, but most of the tracks were written over the past 3 years after the group’s live performance at the 2008 Grammy Awards. Rest assured though, the ever-stylish Morris Day still preens into his Jerome-held mirror and delivers trademark cheeky-cheese lines such as ‘you like the 12″? …and i don’t mean the record’, and ‘talkin’ about one of my favourite subjects – me!’, punctuated with his staple bird-like haw-HAW.

My love for the Time can surely be traced back to the depths of my public school gymnasium, where ‘cool’ high school kids would come in and DJ our dances, packing Prince, Michael Jackson, Platinum Blonde and Corey Hart into their vinyl crates of all that was hip and relevant. And of course, girls. Anyone who says they didn’t practice ‘the Time dance’ at home in front of a mirror at least once beforehand is lying to you. While standing up against the gym wall, the lights would dim to the first chorus-soaked guitar chords of Purple Rain reverberating out into the near darkness, signalling that it was time to make your big move, or risk spending the next 8 minutes of your pathetic life alone and staring down at your best sneakers. 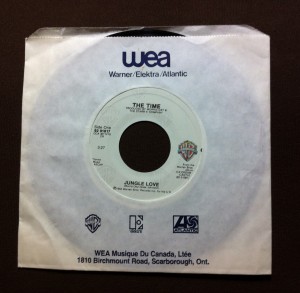 Jungle Love was one of the only 7″ singles i owned back in tha day (sadly missing 2 minutes of Prince’s funky-fierce guitar solo from the end of the album cut), inexplicably along with Conga and Who’s Johnny?, which i will attribute to my sister. These fit right in alongside other new LPs and cassettes containing the sounds of Def Leppard, Helix, Run DMC, INXS, Michael Jackson, Mötley Crüe, Grandmaster Flash, Peter Gabriel, Van Halen, the Art of Noise and the Beverly Hills Cop soundtrack, no questions asked, with the naiveté and confusion of our formative listening years precluding anyone from passing judgement.

So why am i excited for a new Time record after all these years? Jay and Silent Bob aren’t the only ones that Morris & Jerome helped through their formative years. Once transferred to cassette, i jammed to Jungle Love for hours, along with James Brown and Led Zeppelin, on a rickety old Ludwig jazz kit borrowed indefinitely from a friend of the family. The Time embodied a flamboyant yet smooth style that put the fun in your funk, a swagger in your step and some confidence into your young game. Not that it always worked out as well as it seemed to for them, but they gave you the cojones to try, and that meant something to a 13 year old kid standing on the verge of getting it on. Can y’all sing this? I pledge allegiance… to the Time.