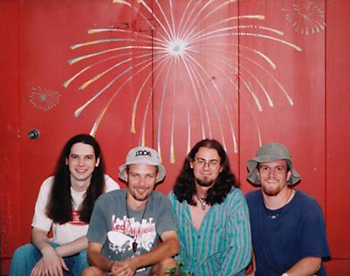 Fly Fantastic; the Kickstand hangover. We were the equivalent of waking up after a party to Frank Zappa spinning on the turntable, scratching your head and putting on the Allman Brothers instead. Geoff Jarvis, Ben Kaplan and myself, along with several other game participants, formed what would be an ever-rotating band of rogues, rascals and jammers. Starting with Nick St. Hubbins and transitioning to Paul ‘the Anvil’ Aitken, lead guitar escalated quickly into a supremely jazzy dressing on top of the Fly salad. When keys were the soup du jour, Mike Bonnell and Geoff Warder impressively tackled the soup of the day. When it was just the three of us, it was just the three of us. Blues, jazz and jamming were the daily specials. London, Toronto and Windsor became our ‘restaurants’. Geoff’s shitty van became our kitchen. 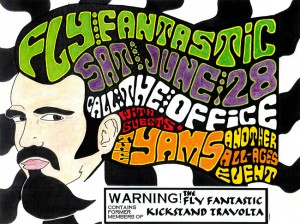 One stellar album and many epic live shows later (including Killer’s roadie debut at the Matt Good/Widemouth Mason show), we decided it was time to close shop and pursue other avenues. Call the Office, the Embassy and the Loop were all fantastic venues for us to spread the love, and we appreciated every minute of it, even if the keys players threw a spat or two! Might have had something to do with the pay?