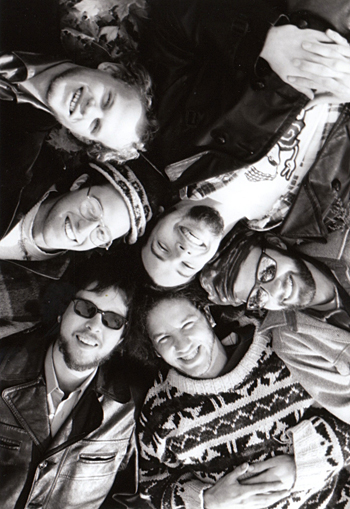 Spawned from the tripped-out depths of the Music Industry Arts program, Kickstand Travolta came to be during one unassuming basement jam that magically unified 5 guys as a band and created our sound on the spot (see Where’s Miles? first rehearsal below). Those 5 guys would be Rob Hedge, Barrett Lawrence, Ben ‘Hair Salon’ Harrison, Geoff Jarvis and yours truly, and that sound i spoke of was a groovy mishmash of funk, folk, pop, rock, jazz and a touch of reggae, all swirling around to create lengthy explorations of musical weirdness.

Using a setup of vox/spoken word, acoustic & electric guitars, harmonica, organ, electric piano, bass, drums, and later the addition of extra percussion from ‘Bongo’ Ben Carter, we set out on a multi year path across the fields, barns, stages and studios of southwestern Ontario with one goal in mind: just make’em dance. With a heady combination of mostly original material sprinkled with a few funky covers we accomplished just that. From our first show opening for Gypsy Soul at Call the Office to playing the Embassy with moe. on their first Canadian tour to being infamously dissed by Sloan in Chart magazine, we were happy hippies living our caravan dream. Borrowed Tyme, Fat Cats, Jacqueline Rendell, House of Velvet, the Izen Brothers and Shikasta were all frequent travel companions on our hazy journey through the mid 90’s.

Kickstand 2.0 came about when Barrett left to continue on his magical mystery tour beyond the confines of a now 6-piece band and Borrowed Tyme’s Ben Kaplan was swiftly drafted to contribute a bluesy, guitar-driven element to the direction of the band. The manic energy of the live performances escalated quickly into sweaty dance floors fuelled by ever-lengthening jams, alcohol, psychedelics and weed.

All good things must come to pass, and on May 9, 1997 we played our final show to a packed house at the Embassy. Fittingly, Ben, Geoff and i, along with MIA pal Nick St. Hubbins, opened the show as Fly Fantastic, continuing on in the Kickstand tradition with a heavier blues base and even lengthier jams. But that is a story for the next section. This story comes to a close with a mantra from one of the earliest songs i heard from Barrett & Rob back when Geoff was passing me cassettes containing mad 4-track creations; livin’ it, laughin’ it, lovin’ it, digin’ it.