Up until this evening, i had a brand new, still in the box, untouched 4 qt. oval slow cooker sitting in the bottom of my cupboard, providing support for some boxes of pretzel snacks. Not emotional support, although i’m sure they could use it due to my propensity for eating those things, but physical, i’ve been glued to this spot since Christmas 2009 support. For reasons i’ll reduce to availability of canned goods, a big-ass (well, medium-ass) cooker and the craving for a hearty, reusable meal, i decided to pull it all out and see what type of chili concoction i could come up with. As with all of my cooking endeavours, there are no definitive plans as to what will end up in the meal, quantities of ingredients to be used, or how long it will be cooked for. That’s for amateurs, dude. Also, can you really fuck up a chili? Here’s what i ended up with. I gotta say it turned out to be pretty durned tasty, which is amazing since i’m gonna be eating it clear through next Tuesday.

The preparation is retardedly simple. Put everything except the beef into the cooker. Add sauces and seasonings as you see fit. I like it hotter, so more pepper, mustard and spices for me. Fire up the cooker on high and put the lid on. Now you can brown the beef in a separate frying pan, then add it to the cooker with the rest of the stuff. I left it on high for a couple hours, then switched to low for another 4ish hours. I’m sure you could do the whole thing on low and leave it for the day if you had, you know, somewhere to be.

Where the magic happened here i think, was with the corn and the soup mix. They really tied the chili together. Other things i would have chucked in, had new shit come to light, would have been some chopped green/red peppers and some type of hot sauce. My bbq sauce/mustard combo served as my hot sauce substitute. I suppose you could also leave out the beef and go veggie if you’re one’a them types, but that would be like, your opinion, man.
Serves: a shit-ton. 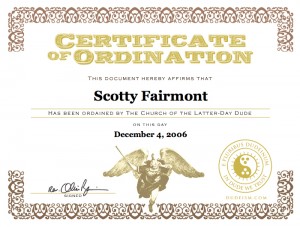 Much of the Dude’s dialogue is composed of mantras for the deeply casual, or as it’s stated in the Coen brothers’ original script, the ‘rumpled look and relaxed manner suggest a man in whom casualness runs deep.’ Aphorisms such as ‘just take it easy, man’, ‘ah, fuck it’ and the paramount ‘the Dude abides’ all provide the necessary means for, necessary means for navigating the strikes and gutters of daily existence, allowing you to roll your way into the semis. These mantras take root in some of the world’s oldest philosophies and religions, including Taoism and The Tao Te Ching of Lao Tzo, which shares the ethos of just taking it easy and going with the proverbial flow. It now has a Dudeist interpretation for our time and place called, appropriately, The Dude De Ching. END_OF_DOCUMENT_TOKEN_TO_BE_REPLACED

In August of 2001, i stood in my parents’ front lobby watching Wilby’s sister repack his poor excuse for a suitcase, mere minutes before we had to be on the road to Pearson International to catch our Delta ‘buddy’ flights to Budapest. According to her, rolling your clothes was the most economical way of packing, creating extra room for him to stash his initial Rogaine treatments. Might as well be a complete rebirth. It was the end of an era in London, ON, with former jobs, abandoned apartments, failed relationships and a string of anal beads all being left behind in our wake. It was like Bill Murray at the beginning of Stripes.

Wilby, Killer, JB and i let out for Hungary in mid-August, heading off to reset 4 lives that had been fucked up in one way or another. My buddy Rich, having lived there for several years already, had hooked us up with a sweet 4ish bedroom flat, wired to go with phone, interweb, furniture and bedding. Waterbedding. Our landlord turned out to be Hungary’s waterbed king, and also a pot dealer, swinger, US importer/exporter and bassist that had once sat in with Link Wray. This apartment was to be our new sanctuary of work, play, more work, more play and occasional rest; our fucking Xanadu. We had decided to start an online IT news/research company, and figured Central Europe was as good a place as any – we knew peeps: we had hookups. It wasn’t. END_OF_DOCUMENT_TOKEN_TO_BE_REPLACED

“I wasn’t born Bad. My tombstone will have my real name on it, but until then I’m just gonna stay Bad.”

“I’m the Dude, man, so that’s what you call me, you know.  That, or His Dudeness, ah, Duder, or El Duderino if you’re not into the whole brevity thing.”

From a nickname used as a first name to high consumption of a signature beverage to driving an old rust coloured beater with a ‘traveler’ tucked between their legs, Bad Blake and Jeff ‘The Dude’ Lebowski are two honest hombres cut from the same smoky, booze-soaked cloth.  They appreciate modest comforts during simple daily endeavours, such as driving with your pants undone or hitting a Ralph’s in your bathrobe, and are joined at the musical hip by classic country and rock overtones.  Since Crazy Heart writer/director Scott Cooper had never seen The Big Lebowski prior to filming, one can assume that executive producer and star Jeff Bridges had more than his fair share of dudeisms to scatter across the whole durned human comedy. END_OF_DOCUMENT_TOKEN_TO_BE_REPLACED