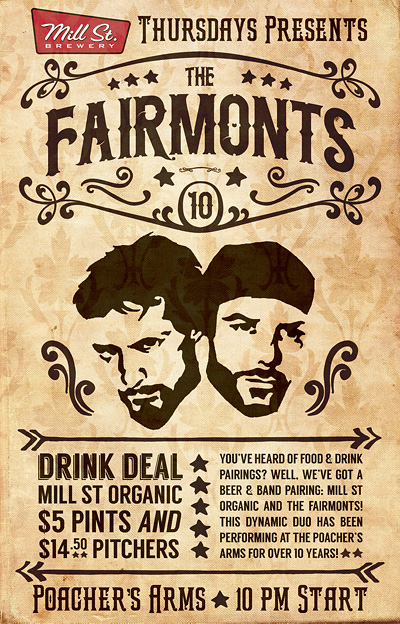 The Fairmonts formed in 2004 as an acoustic duo out of the ashes of The Gentlemen via The Tribbianis, a GT’s basement staple on drunken Saturday nights in the early ’00s. Basically, dudes just kept dropping out until we were down to two. Featuring the Captain on guitar, vox and harp, and myself on djembe drum, vox and mandolin, we secured a weekly Thursday night gig at Poacher’s Arms that we rocked faithfully for 15 years. This gig, plus a decade of Saturday nights at Barney’s Lounge, were beloved, boozy staples on the London music scene. Let’s just say everyone knew where to find us.

With over 400 songs in the cover arsenal, we decided it was time to start recording some songs of our own. After a quick demo album of cover songs, the Captain started to demo some original country-flavoured material he had kicking around. Several post-gig 4 a.m. basement sessions later, he passed me a cd of songs that would be shaped into our first album, King City. Recorded in our basements with Darren ‘Mulligus’ Magiwally, King City was distributed locally through the band, and for a brief stint via iTunes.

The long awaited second album was once again recorded & mixed by Mulligus at Jukasa Studios, as well as his own Route 66 Recordings. The album is essentially 2 EPs; a combination of new tracks recorded for the second album, along with full remixes of several King City classics. A special collaborative recording closes out the 8 songs, featuring a handful of SW Ontario’s finest.

Play the full collection of remixes and new tracks below, download The Weight, and keep tabs on the band through Facebook.

10th Anniversary Album by The Fairmonts

Here’s an epic 6+ minute video of The Band classic Ophelia from back in the day at Poacher’s Arms, when soccer was on the dish. The clip was shot by Jay Bolton, and features Magic Mick Baker on sweet mandolin.

We’d also be remiss if we didn’t share our take on a typical Weekend at Barney’s.